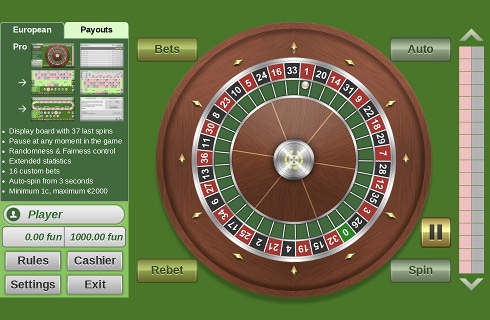 Nowadays one can test the ever-changing Luck right from their home using a laptop or tablet. Thanks to internet technology advances, the type of entertainment whose origin history is still a vigorously debated topic, has stepped out into the virtual world. Numerous online casinos offer hundreds of games and dozens of the beloved roulette types. What are the differences between the various types of the famous “Wheel of Success”? How many are there altogether? What are the most popular ones? Let’s have a look at the intricacies of such a simple yet surprisingly exciting game.

Classic roulette: from Europe to the New World!

The names of European, American and French Roulette are familiar even to those who have never thrown the precious ball onto the numbered spinning wheel.

• European – the gambling “Lady” of the most respectable age. It features 37 sectors: 36 numbered sectors and a null sector, the so-called “Zero”. If there were no Zero sector, the chances of winning would have been 50/50. However the “Zero” shifts this equality to the casino’s advantage of 2,7%. Traditional bets include betting on a single number, on equal chances (red/black, even/uneven etc.), on two, three, four or six numbers, on columns etc. Moreover, European roulette has a track field where one can place additional bets, for example on adjacent sectors of the roulette wheel.

• French roulette – European roulette’s “sister”. 37 sectors including the “Zero” one. The only distinctive feature is the absence of track bets, the so-called oral bets.

Let’s take “Multiball” as an example of an entertainment well known to many. Quite obvious from its name, this game features two or even three balls instead of one. Trying to go through with this at a real casino would be impossible even due to physical limitations: the balls will collide, interrupting the usual flow of the game.

But anything is possible in the virtual world! Obviously the game speed increases greatly when multiple balls are released. One can bet on single numbers as well as on certain combinations, for example on a sequence of neighboring numbers on the wheel. If you decide to give your luck a try at “Multiball” remember: the higher the chances of winning, the lower the payouts. Such are casino laws.

Express-roulette – a popular variety of the game featuring three balls and a possibility to place several extra bets with big payouts of up to 210 to 1:

No “Zero” – fewer losses! No Zero roulette varieties are becoming ever more relevant. It’s the choice of high bidders as well as mid-range players. The reason? The absence ofthe “profitable” casino sector. Basically, having placed a sizable bet you will definitely not lose it solely due to the presence of the “zero” sector. But of course this generous venture has its own specific rules. Most chain establishments will charge you a commission on EACH bet you make, even if it is small. But there are offers out there which are more profitable to the players than others, as at betvoyager.com. Here, a small commission is charged not on every single bet, but SOLELY ON THE NET WINNINGS. After a game session is closed. A sensible approach? Absolutely.

There are also other types of roulette.

• A Mini-version is perfect for beginners. The name says it all. This game is a mod of the classic European roulette. However, there are only 12 numbers instead of 37 on the wheel, including the “Zero”. The bets are also familiar: even/uneven; red/black; single number; a combination of numbers. As to the house edge of the establishment, it comes down to 3,8 percent. The client’s chances of winning here are much greater than, for example, in American roulette.

• Bonus roulette – a pastime for gourmands. The playing field has unusual sectors which may bring substantial cash returns. For example, there is a variety with «?» and «??» sectors. They each increase the original bet 500x. Marvel Universe fans will enjoy the themed version with a special sector offering a bonus game.

• Letters instead of numbers? You will find this roulette type at online casinos too. You are sure that you will hit the same letter several times in a row? Go for it and get a chance to win 10 000 to 1!

• Pinball-roulette is an interesting mix of two very popular entertainment games. There is no usual wheel in this game, but the ball is there. After its launch, it collides with obstacles, changing its path. As a result it lands at the bottom part of the field, in one of the two-colored winning sectors numbered from 0 to 35.

• Three-wheeler – a roulette with three wheels created for futuristic designs’ admirers. The vertical fields rotate in different directions. The closer you guess the numbers coming up on all three, the greater will be the sum of the final prize.

• La Boule – another extraordinary variation of the legendary game. The key of the game are the repeating sectors with numbers from 1 to 9. If you are bored of the classic versions and you want to experience something new, you should get down to study La Boule’s rules.

• Chinese Roulette – the name hints on the targeted audience of this game. The game is split into 12 sectors, with possible bets including one’s zodiac year sign or one’s luckiest year with a payout of 11 to 1. The Zero is replaced with an eternity sign.

One may even find roulette with no numbers on the internet space. There are varieties with sectors of all the colors of the rainbow, star signs, even animal illustrations – developers’ imagination has no bounds. As for you, online games connoisseurs, you just have to FIND YOUR GOLDFISH in this ocean of excitement and thrill! Good luck and great triumphs to you!