Bitcoin versus Ethereum: What’s the Difference? 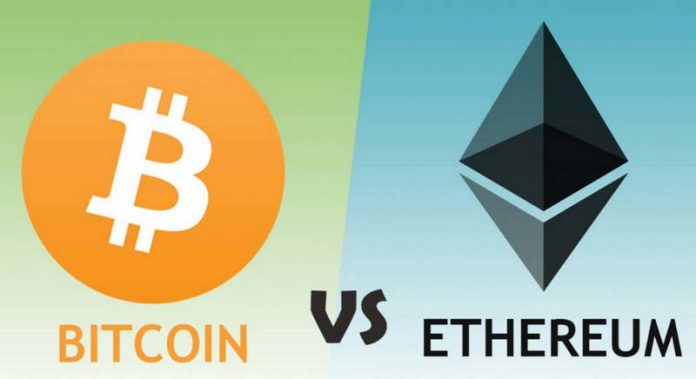 Bitcoin and Ethereum are two popular cryptocurrencies. Like the other phenomenons of the modern world, both cryptocurrencies stem from the desire to be independent that their creators craved for. Anyway, it stands to reason that there are some differences that allows you to understand better the mechanics of both tools.

The nature of both cryptocurrencies

First and foremost, let’s take a look at the launch of Bitcoin. The beginning of the above-mentioned cryptocurrency reaches back to 2008. This was the time when Satoshi Nakamoto described his trailblazing idea in a dedicated paper. The success of Bitcoin should have been underpinned by its two indisputable advantages — more friendly transaction fees and the operating body which was place beyond the monetary system. In general, Bitcoin is a typical digital currency which is accompanied by an ambition of crowding out traditional currencies and gold.

The Ethereum is somewhat slightly different. The aforesaid cryptocurrency is based on Blockchain technology. To put it briefly, Ethereum is simply a “token”. Its main feature comes down to the fact that it allow s the users to create “Smart Contracts” based on the principle: if the event A happens, then something else appears. The transaction based on those contracts are settle din a way that is devoid of the risk of fraud and the interference of the third parties.

First and foremost, the production of Bitcoin is limited. This means that the limited number of Bitcoin will enter the market. On the other hand, Ethereum is a token which is inflationary — it resembles to some extent “flat money” as there is no limited number of tokens.

Then, let’s take a look at issuance volume. Bitcoin launches 12.5 new entities every 10 minutes whereas Ethereum creates 120 in the same time-span.

The programming languages that are the foundation o both cryptocurrencies are disparate. To put precisely, the possibilities of the scripting language involved in Bitcoin are very restricted. By then, in the event of Ethereum, general-purpose language. This means that the aforesaid mechanics (called by the programmers as “Turing complete”) enables a broader variety of operations, known as “Smart Contracts”.

When discussing distinguish factors, we cannot ignore the currency peak. The cap of bitcoin amounts 21 million and 17 million units have been created so far. Alternatively, Ethereum has no concrete cap. However, according to circulating rumours the production of Ethers is planned to be ceased for a while or limited.

The another dissimilarity concerns the cost of the transaction. In the case of Bitcoin, the cost is calculated based on the transaction volume. By then, the Ethereum assigns a cost for each transaction or use of the blockchain storage according to its own algorithm.

The another strong difference which has profound and long-term implications is the utility. When you purchase Bitcoin you can exchange it for other goods and services. Some people buy Bitcoin because they simply want to secure their capital as in the case of gold. The last motivation becomes prominent especially in the event of optimistic Bitcoin market prediction. The usage of Ethereum comes down to creating dApps (decentralized Apps) which are based on Ethereum blockchain. Anyway, some people buy Ethereum for trading purposes and as a long-term investment. However, it is clear that rising popularity of Ethereum will reflect in a tighter connection with a daily life.

Overall, both Bitcoin and Ether are cryptocurrencies. That being said only the Bitcoin was designed with intention of replacing the original money. As far as Ethers are regarded, the issue is more complex. Ether will be never an alternative for the traditional payment but it will still monetize and foster the development of Ethereum so that the developers will be able to conceive and run dedicated application called dApps.

Ethereum is simply a proliferation — the extension of the Blockchain conception which is indispensable for Bitcoin. Initially, both digital currencies were not perceived as rivals. However,as the popularity and capitalization of Ethereum increases, it becomes more and more enticing, especially for individual investors who are interested in trading. Nowadays, the capitalization of Ethereum is higher than Litecoin but also substantially lower than Bitcoin.

Bitcoin market prediction assumes that the aforesaid cryptocurrency will hit its highest threshold by the end of 2018. What is perplexing, it is hard to assess the particular effects of upcoming Bitcoin regulations. Apart from that, the importance of Ethereum and other cryptocurrencies will rise. This is the reason why there will be a transition of Bitcoin utility from the means of transaction to a tool which enables to store value.