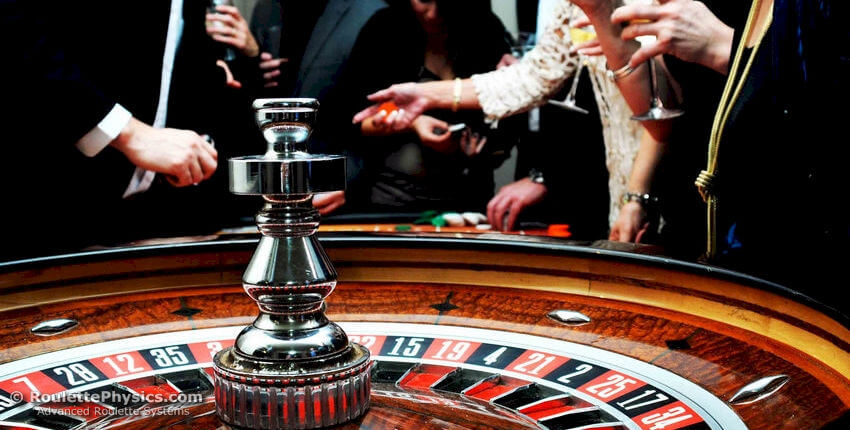 The Internet is full of well-written and informative-sounding articles about every subject imaginable. When it comes to the so-called best advice for playing roulette, almost all of it is absolute bullshit. Please excuse my language, but let’s not beat around the bush here.

I’m often criticized by people who have no real experience in professional roulette systems, who say that I’m biased towards roulette systems based on physics. But forgive me if I believe that physics determines where a little ball will land. Please excuse me for believing the size of my bet has no influence on the winning number. Mathematics and plain obvious fact is not a matter of opinion.

The best and worst roulette bets

Only certain types of roulette bets have a chance of winning in the long term. The worst advice for playing roulette is to increase bet size after losses (roulette progressions), particularly if there is no regard or attention to where the ball actually lands. Of course we all mean to predict the winning number, but almost every system does not even consider why the ball lands very does. And almost every system does not consider any real physical variables to predict the winning number.

I find myself going in circles trying to explain to others, what I myself wouldn’t have understood around 20 years ago. If someone tried to explain to me why my earlier roulette systems had no chance of working, I would have considered this person to be arrogant and annoying, and perhaps even ignorant. So I used to be the typical system player.

Okay try to imagine this. You believe something to be true, and hold on to your belief. Then someone tries to explain to you why you are wrong. They explain that they once thought as you did, and you briefly think that you being wrong is a possibility, but you quickly sweep it under the rug and continue believing what you do.

And 20 years later you find out how wrong you were, and wonder how you couldn’t possibly see before. You realise you wasted many years and countless hours on something that was doomed to failure from the start. And only if you paid attention to other people, and tried to understand the reasoning, then you would have started profiting from roulette much sooner. Then you find other people who were just like you 20 years ago. You know you have been through their phase before. You know that you wouldn’t have listened either. You try your best to help them, but most aren’t interested. How it looks to you is like someone constantly walking into a wall and butting their head, and wondering why it hurts. You tell them why it hurts, they say yes okay, and walk straight back into the wall again.

Can you sense the frustration in me? Well is nowhere near as bad as it used to be. Imagine trying to teach someone that 1+1=2. But they keep saying it equals 3. Okay so I use this example all the time, but now I’ll explain more about what I mean.

Perspectives of the best and worst roulette bets

In a recent article, I explained one of my earliest systems for red and black bets. Basically you would bet on red, and if you won, you decrease the bet by one unit. If you lose, you increase the bet size by one unit. So the theory is that over time there will be roughly an equal number of red and black numbers, and you will end up betting just one unit, but will have profited. I suggest try this in a roulette simulator, and you will likely find you make a reasonable short-term profit.

So initially you have the perception that increasing the bets will allow you to win back losses.

Let’s say the betting session was below:

Starting bankroll: 10 units
And we are only betting on red.

At this point, we have profited +3 units. And there have been an equal amount of reds and blacks. Of course for now we and forgetting the existence of green zero.

So with our simple approach, we have the perception that we defeated roulette by increasing the bet size to cover losses.

But now I’ll explain why your perception is incorrect.

We may think we have increased bet sizes to cover losses. But the bets we really have made are:

Now each of these spins are INDEPENDENT. Again forgetting that zero exists, at all times, the odds of winning or losing are still 50/50. Keeping this in mind, then how on Earth would changing bet size change this fact?

Let’s look more at the odds:

So nothing as changed. It is only our perception that we are betting higher to cover losses. AND EVERY BETTING PROGRESSION IS EXACTLY THE SAME.

Another way of looking at it is we have wagered 15 units in total. And whether we bet those 15 units in one spin or 6 different spin MAKES NO DIFFERENCE. Remember the odds of winning haven’t changed at all.

The only thing that can ever change the odds of winning are increasing the accuracy of your predictions. This means understanding why the ball lands where it does, and basing predictions on the contributing factors. This is otherwise known as basic physics.

When I first learned about using physics to win roulette, it wasn’t what I wanted so I dismissed it. I wanted something really easy and mechanical. But the truth of the matter is physics-based systems can indeed be mechanical too. In fact my roulette system is a mechanical process where a specific computer algorithm is followed. So anyone who applies the same system at a wheel will make exactly the same bets. It’s the same case with a roulette computer, assuming the computers use the same algoirithms and equipment. But certainly they are not as simple to apply as RBRRRBBBBRRR systems. Anyway everyone can use whatever approach they want to play roulette, but if you understand what I’ve said, you’ll look at cause and effect in roulette, rather than progression. This is one of the most critical pieces of roulette advice to understand. This is the most common type of online roulette strategy.

So next time you see a system based on RBBRRRBBRRBBB and similar sequences, you should be asking “does this RB sequence change the odds of red or black spinning next?”. And to my knowledge, there is no red or black sequence that has even been an indicator of whether red or black will spin next. I hope at least one person understands and takes this advice, and why I say “the only way to beat roulette is by increasing the accuracy of predictions”.

A simple roulette system is not going to work – be realistic. But there are many systems that work, and are easy enough to apply in real casino conditions. There is no such thing as a short-term winning roulette system – either the roulette system wins in the long term or it doesn’t.