The Martingale Roulette System – Does It Work? 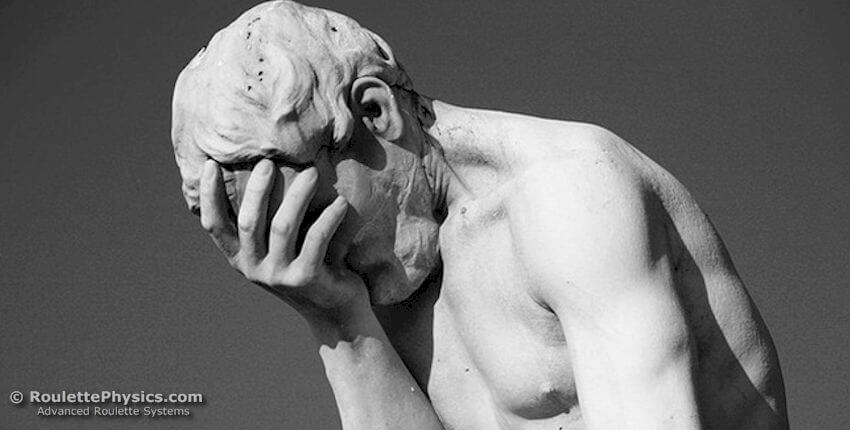 The Martingale is a money management roulette strategy, which can be applied to any gambling game, including roulette. It is not a system, and it doesn’t even consider what really matters in roulette. I’m talking about the winning number itself. If you want to know the roulette systems that really work, visit my page about how to win roulette. But there is one exception where the Martingale can actually increase the amount you win in the casino. I’ll explain this further down this page.

What is the Martingale roulette system?

Simply put, the Martingale is doubling bets after losing. For example, you might start by betting one unit on black. You are giving no consideration to where the ball might land, other than you are hoping for it to land on the black numbers. Now if you lose, your next bet will be two units on black. If you lose again, the next bet will be four units on black. So after losses, the betting pattern will be 1,2,4,8,16,32,64 units.

A great way to quickly blow your bankroll

You can see that after only a few losses, the size of your bets are enormous. So the Martingale system is a great way to blow your bankroll in spectacular fashion. With the rapidly increasing bet size, you are bound to reach the maximum table bet size very quickly. The table betting limit exists to prevent the casino falling victim to a very lucky wealthy player. There are players that allow very large bets, although they are closely monitored and still have their own limits.

Would the Martingale system work if there were no betting limits?

If there were no betting limits, you would likely run out of bankroll because your bets become so large. But let’s say you had an unlimited bankroll, and there were no table limits. The result of this is that eventually yes, you would win. The thing about the Martingale is a bad losing streak wipes out your bankroll. But if you had an unlimited bankroll, you would be wiped out and you could keep increasing your bet size. Of course they will still be the rare event that takes a large chunk of your bankroll, but you would simply counter that with an even larger bet on the next spin.

But back to reality here. You don’t have an unlimited bankroll, and every table has a maximum bet. The minimum and maximum bets often vary considerably between inside and outside bets. For example, in Europe I’ve seen tables that have a maximum bet of €50,000 for the outside such as reds, blacks, odds and evens etc. But the maximum bet for inside numbers was only €500. This is for many reasons, but basically the only bets capable of winning consistently without luck, are inside bets. This is because only they can represent specific sectors of the wheel. The roulette systems that work all involve predicting areas around the wheel, where the ball will fall.

Was the best Martingale betting strategy?

There is only one circumstance where the Martingale roulette system can be useful. This is when you already have a strong edge over the casino, and can accurately predict where the ball will land. An example is a roulette computer, where you can almost guarantee a win every second spin. Sometimes accuracy can be even higher. If you look at my other demonstration of a roulette computer, you can see I win on 93% of spins. I don’t think there was more than one loss in a row.

In such a case, you could very easily apply the Martingale system. It doesn’t actually improve your chances of winning, but in this case it increases the amount you are likely to profit in a specific time. You need to understand there is a difference between edge, and profit per hour. This is something that may only be understood by professional players.

However, the Martingale is a very aggressive roulette strategy. Even in cases where you can win on almost every spin, I wouldn’t apply it. One example is betting on red or black. The chances of winning are approximately one in two. It means an average, if you bet red, you will win approximately half the time. But have you ever seen 10 reds or 10 blacks in a row? It may be rare, but not rare enough so that you never see it. Even five in a row is bad enough to cause a large loss.

The Illusion of Increasing Bet Size to Win Back Losses

One of the most seemingly obvious ways to win back losses is to increase bets sizes. If you are just starting out playing roulette, the chances are this is how you are trying to profit. You may not even know you are applying the Martingale system, or that you’re supposed winning system has a name.

When I didn’t fully understand the facts about winning roulette, I myself was applying the Martingale. It took me some time to get over that illusion of thinking increasing bet sizes helps. After all it does sound logical.

But one way to understand it is to keep in mind that every spin on roulette is independent. Even after 10 or 100 reds in a row, the odds of red and black spin next haven’t changed. They are still approximately 50-50. So what will changing bet size do? All it does is increase the amount you wager and risk on the betting table.

Putting it into context imagine three different players. The first player makes a one unit bet on red, and loses.

The second player makes a two unit bet on red, then loses.

The third player makes a bet of four units, then loses.

Why The Martingale Fails

The martingale fails because it doesn’t change the player’s odds of winning. For example, if it was applied when betting red in roulette, the odds of winning are 18/37 (0.4865), but the payout is only 1 to 1. And if the size of the bet is varied, as it is in the martingale, the odds don’t change. So the payout is always less than the odds. Putting it another way, if the progression was 1,2,4,8, then it wouldn’t matter if one player made all the bets by themselves, or four different players made the bets. Each bet is different and with the same odds of winning.