Test your systems the right way, without risking real money. 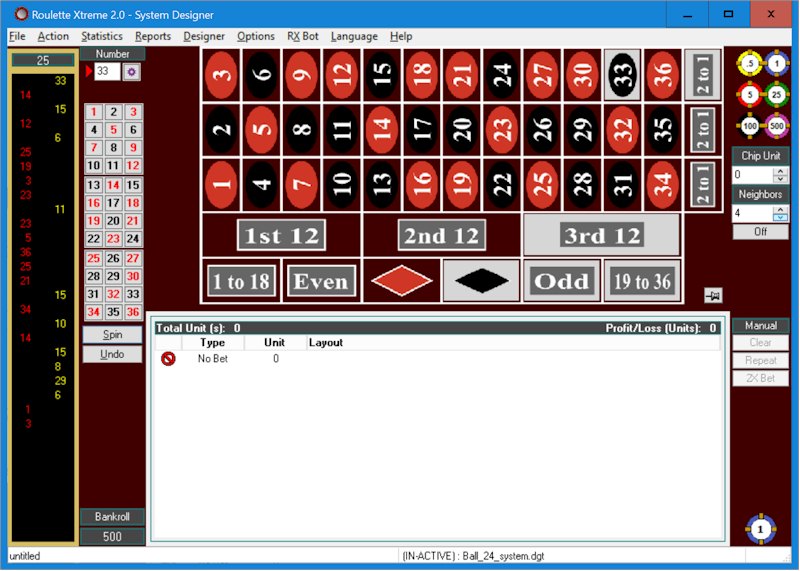 Before using a roulette system tester, read this article so you know how to use it properly! When I first started to play roulette, admittedly like most people, I had no idea what I was doing. I didn’t use any roulette system tester and my only testing involved real money at the table. It didn’t take long until I had a system that had won me more than I had lost, and I was convinced I had beaten roulette. Soon after, I learned the harsh reality. I also wasted years trying to beat RNG roulette, which is essentially a slot machine with roulette animations – it is not roulette at all. Even after I knew I was probably wasting my time, I still continue to look for an easier way. Eventually I came to the conclusion that existing methods could be developed further to make them even better, and easier to use, although this is a different story. I could have saved years if I knew how to properly test my systems. This article will explain the basics.

Test the working principle of your roulette strategy

For any working roulette system, there must be a reason why it works. This sounds simple enough, but most people blindly test hoping that there is some unknown principle or secret they have uncovered, which allows them to win. You need a proper system checker but I’ll explain something first.

When developing a system, it should begin with an idea. Any good roulette strategy needs a solid concept. I’ll use the concept of thinking that eventually there will be some kind of balance that occurs. For example, say 10 reds spin in a row. This is a classic example, and you may believe that red is on a streak. Or you may believe that black is finally due to spin next. The reality is the odds don’t change, because previous spins do not affect future spins, at least in the way that most gamblers expect.

But for the sake of keeping things simple, let’s assume that you think black is finally due to spin. Before you waste thousands of dollars testing this principle, check the results of real roulette spins, and look for cases where there are many red numbers in a row. Then check how many times either black or red wheel spin next. Forgetting that zero exists, normally you can expect there to be a 50-50 chance of either colour spinning. Now does your test indicate the odds change after a streak of colours?

If you find most roulette system testing software complicated, use the free tested I provide below which can very easily determine if your theories of patterns are legitimate, or nonsense.

The software is free to distribute provided the zip file is distributed as-is, without any changes.

STEP 1. Unzip the files to any directory you want, such as C:/pattern finder/

STEP 2. Load the software and you’ll see the interface shown below:

STEP 4. Click “Browse” and select your file with spins. It must be a text file with one spin per line, like below:

IMPORTANT: In your file containing all spins, you must have a character like “comma” after each number. For example, if your spin file has:

And you want to find the sequence of 32,31, then you must search for:

The zip file you downloaded includes some test spins but you can use your own too.

STEP 5. Now click “Go” and the software will count the number of times your pattern appeared.

More details and things to try are at www.roulettephysics.com/roulette-pattern-detector/

Test a significant amount of spins

Of course you will need to test over a statistically significant amount of spins, otherwise such testing will not tell you anything. After all, anything can happen over a small sample of spins.

Some players will argue that you only need to win over small amount of spins. And this is true. But the more experienced players may use the following example.

Say 1000 players all used the same system. Maybe 400 are winners, and 600 are losers. The 400 think they are champions and winners that have conquered roulette, and the 600 go home broke depressed losers. My point is the winners will have profited over the short-term, and anyone can be lucky in the short-term. If the 400 players continued to play, and their system didn’t work, they will eventually lose their entire bankroll. Another way of explaining it is 1000 players all trying to win in the short-term is the equivalent of one player playing in the long-term. The end result, if the system is ineffective, is the casino pays out less than it receives. They still win.

Roulette system tester software is invaluable, much like how computers automate many of our everyday life. In a few seconds of computing, software can tell you whether or not your system is likely to profit you in the long-term. The alternative is risking thousands of dollars and weeks in the casino, only to find that your system doesn’t work. Generally the most popular roulette systems simulations software (roulette test software, or roulette tester) is roulette xtreme. It is a brilliant and affordable piece of software.

The only real downsides are it is not fully capable of testing the types of systems that are most effective. For example, visual ballistics.

Do not design a system over set spins

It was created by an individual named Don Young, who used it as what he claimed was conclusive proof that his system worked. Basically you pay him $10,000, then test his system over the set spins, and this is his guarantee that his system works. One problem with this is any system can be built around set spins, and appear to be profitable even over millions of spins. Another problem with Don’s approach is his system has very strict requirements that mean bets are very infrequently made, and many spins are skipped. So instead of testing over thousands of spins, you are actually testing over hundreds of spins, which is still considered only short-term. And any system can win in the short-term.

Never test with software provided by casinos because they are often rigged. Also you can’t even beat most online roulette because it uses random number generators, not slot machines. You can only beat real wheels. Of course it is more appealing to play at home, but you need to play only at live online roulette casinos. You can play live online roulette for free – see the recommended sites. At least when a real wheel is used, you can see the cause and effect behind winning numbers. The roulettetraining.com website also has free videos of real roulette spins you can use for testing.

But if you prefer software roulette, then the best roulette simulator for testing is at https://www.roulettephysics.com/free-roulette-simulator/ because it at least emulates real wheel physics.

Be clear about your intentions

Many players just want to have fun, and are not looking to make money on a serious basis. But in cases where you are serious about winning at roulette, properly testing will save you a lot of time. I also suggest you carefully consider that most systems have already been tried before, and you shouldn’t waste time repeating people.

If you understand the basic principles of roulette, you will ultimately realise that the only way to beat it is by increasing the accuracy of your predictions. This is a whole other article.